Historic Scotland have recently produced a short guide entitled The Repair and Maintenance of War Memorials.

This is a free guide which gives custodians valuable information about the environmental risks to war memorials and the types of materials used to maintain them. It also makes recommendations for the most appropriate courses of action for maintenance and conservation. 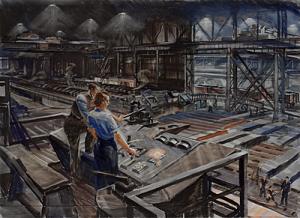 Learning her Job at a Steelworks

It is sometimes claimed that women are not commemorated on war memorials. This is not true but you do have to look a bit harder to find them, only because their casualty rates weren’t as high. However, their contribution to the war effort is not as visible. This is set to be addressed by Sheffield Council who have announced that they will be working with women who worked in the steel industry during WW2 to create a memorial to recognise their efforts.

Four ideas have been proposed: an abstract sculpture, a bronze sculpture, a garden of remembrance or commemorative plaques.

It will be interesting to see what they choose.

This article was submitted by UKNIWM volunteer fieldworker Gordon Amand

You may wonder what have Roman remains got to do with war memorials. Well, it would appear that in Prospect Park, Ross-on-Wye, Herefordshire a chance investigation has led to the discovery of a strange coincidence.

It began in the summer of 2007, when after a period of heavy rainfall (a feature that seems to have characterised that summer), the 18th century wall dividing the church cemetery from Prospect Park collapsed. The park, on slightly higher ground than the cemetery by about 5 feet, overlooks a U bend in the River Wye. It is here that Ross district chose to site their war memorial in 1920, with a commanding view of the river and surrounding countryside.

After a discussion between the Church authority and County Council, repair work to the wall commenced in early 2008, but it was not long underway when remains of an ancient occupation were found in the ground layers of the park and it was discovered that the war memorial had been erected directly on top of a Roman settlement. The war memorial, a rough hewn plinth and cross with the names of the district’s fallen was dismantled and stored, whilst archaeologists investigated the area, recovering a number of artefacts. It would seem that both the Roman settlers and the town’s people of 1920 valued the view, but for different reasons.

Following the excavation, the site was re-covered to preserve it for future investigation. As November approached, people in the town began to ask if the annual remembrance service would be held as usual in the Prospect. A surprisingly quick decision was made to reposition the memorial approximately 50m from it original location. The annual Remembrance service then took place on a cold and wet Sunday morning. Interestingly, this was the second time in 2008 that a memorial was rededicated in this area. In March, the Greytree memorial was re-dedicated, having been refurbished. I am not sure if there are many other towns in the UK where two memorials have been re-dedicated in the same year.

The re-sited memorial in Prospect Park

It is now hoped that the newly discovered Roman remains will be further explored, and will eventually prove a visitor attraction for the town. Meanwhile, a little way along the hillside, the war memorial stands, once more overlooking the towns and fields from which those it commemorates came.

This article was submitted by UKNIWM volunteer Wendy White:

Jacksdale War Memorial stands at the heart of a Nottinghamshire village, on a triangle of land at the junction of Main Road and Wagstaffe Lane. Unveiled in 1921 in memory of the men from the local districts of Jacksdale, Pye Hill and Westwood who fell in the Great War, the memorial was impressive, some 14 feet high, topped with a life-size statue of a soldier, carved from Carrara marble.  And so stood the soldier in silent tribute, until one morning in early 1959, the villagers awoke to find the statue in pieces on the ground. Stories as to how it happened vary; the general consensus is that it was the result of storm damage. A public meeting was convened shortly afterwards to take suggestions as to the course of action to follow. On the advice of the local ( and original) stonemasons, J Beresford & Son, the Council decided to cap the memorial, placing two stepped tablets beneath the capping piece.

By 1996 the memorial started to show the effects of neglect and pollution, with dirty, stained stonework and letters missing from the names and inscriptions, making them difficult to read.  Action was needed to save the memorial, and the Jacksdale Memorial Restoration Group was founded. Soliciting the help of local business, public subscription and with various grants, the sum of £1,500 was raised, but this was short of the £3,000 needed. As the memorial was placed directly outside the local Co-operative buildings the company was approached. The Co-op not only pledged to provide the balance but also their own craftsmen to refurbish the stonework in time for a rededication ceremony on the 13th of April 1997.

In 2007, a local initiative was launched to bring back Jacksdale’s soldier. This was very much helped by Jeff North, a local volunteer.  It appears to have been a journey not without its difficulties and frustrations; fund raising, planning permissions, structural surveys on the memorial, remedial work for safety, locating a stonemason and commissioning the new statue.  The final happy outcome is that on the 14th June 2009 at 2.00 pm there will be a service of rededication when the new Soldier will be unveiled, followed by a host of community events on the day. A wonderful example of how community spirit ensures that the memory of those lost  in both World Wars continues to be honoured.

A series of free artist-led events will be taking place over the next few months as part of the Heritage Lottery-funded project to restore Stoneham War Shrine. We were interested to see that these include an exhibition, workshops and a talk by Prof. Mark Connelly which will be exploring the spontaneous and immediate purpose of war shrines, focusing on their responsive, temporary nature. Further information about the events can be found on the North Stoneham website.

This blog article was submitted by UKNIWM  volunteer Roy Branson.

Following the First World War many private companies provided memorials for their employees who had served or died in the war. One such was the Midland Railway Company, based at Derby. In addition to the basic infrastructure of tracks and stations the company also had a huge locomotive works and a carriage and wagon works both of which were located close to Derby’s Midland Station. These sites comprised many specialist workshops and were supported by a host of administrative departments including accountants, draughtsmen, estate agents and many others. Additionally, there were several social organisations two such being a substantial institute and a sports association. Most of these workshops, departments and clubs sent men to fight for their king and country, and most of them subsequently displayed their own war memorial.

The memorials were often in one of two standard types; either a brass plaque or a printed roll of honour in an elaborate wooden frame. A particularly fine photographic roll of honour to men of the Locomotive Works General Stores currently hangs in the Reading Room of the Midland Railway Study Centre in Derby Silk Mill Museum. These memorials generally survived the merger of the Midland Railway to form the London Midland and Scottish Railway (LMS) and, after the Second World War, the nationalisation of the railway industry to create British Railways. What many of them did not survive was the privatisation of the railways at the end of the twentieth century.

The locomotive works (which, incidentally manufactured artillery pieces during the First World War) was demolished during the 1990s, and most of the carriage and wagon works went the same way.  The institute and sports club are long gone.  Some of the memorials found their way to Derby Museum and some of them went into storage.  Several are unaccounted for.

The reconstruction of Derby Station in 2008 provided an opportunity to display the salvaged brass memorials and 18 of them are now mounted on a wall on Platform 1.  These have recently been resurveyed by one of our volunteers and entered onto the database.  Their entries can be found by entering the keyword Railway and the place Derby into the advanced search.  Although any further information about them would certainly be welcome…

Following his one day visit to Iraq on 17th December Gordon Brown announced that the Basra memorial wall, where he laid a wreath in memory of the 178 servicemen and women who have died in Iraq, would be brought back along with British troops to  ‘a fitting resting place of its own in our own country’. The brick wall, which has brass plaques with the names of those who died, will be dismantled from its current location in Basra airbase when the last of the 4,100 troops leave at the end of July 2009.

There will probably be much discussion about where the memorial should be resited, as it commemorates service personnel from all parts of the UK, as well as a few from elsewhere. Debates may also take place over whether it will be re-erected in exactly the same form, or if additions and changes will be made. Perhaps the strongest feeling will be that the same bricks and plaques should be re-assembled without embellishment, since they were erected by the troops themselves and have been the focus of commemoration for those serving.

The local residents of Charminster, West Dorset have decided that it is time to stop the further deterioration of their local war memorial outside St Mary’s Church. The memorial to members of the village who died in World War One and World War Two, has withstood the elements for 90 years, but is now showing signs of wear to the stone and lettering. Local resident Graham Matthews hopes the newly launched Charminster War Memorial Restoration Project will ‘raise the £2200 needed to sympathetically clean the memorial, re-cut approximately 100 letters and hand paint about 1400 letters/numerals. Our intention is then to hold a rededication service for the community’.

The website for the project explains that although the memorial may not be unique, it ‘does represent our community’s chosen method of remembrance. Some of the names of those recorded on the memorial may only be remembered on our memorial making it important to preserve it to commemorate that individual’s sacrifice’. This project is one of the vital local war memorial restoration projects that are currently being initiated up and down the country. To find out more you can visit the website at www.charminsterwarmemorial.org.uk

Certain people in Penarth have been busy recently as a couple of new memorials have been erected. One, commemorating two Penarth-born men who were awarded the Victoria Cross during the Great War, has been placed on the front wall of the Penarth District Council Offices in Stanwell Road, Penarth.

The second, placed in Penarth RFC Club, commemorates 17 club players who were either killed in action, died of wounds or died of illness in WW1. Produced by a local artist, Andrew Coslett, it complements the memorial stand that was erected at the ground in February 1925.

Following the fundraising efforts of Lt Col Peter Townsend and his wife, Paula, the East and West Worlington memorial in Devon will be getting a timely spruce up. They have raised £1,200 to pay for a dry-stone-waller to tidy up the wall around the memorial and clean the base ready for Remembrance Sunday.