By ukniwm2
Memorials from the archive, People's stories, Uncategorized
Leave a comment

What is interesting about the tiny village of Hewas Water, more of a hamlet really, positioned three miles west of St Austell in Cornwall?

Firstly, there was the Victory Hall, known locally as The Institute, built by voluntary labour in 1920 it was intended as a memorial to commemorate the end of the First World War. The land was donated by local gentry, the Johnstone Family from the Trewithen Estate at nearby Grampound. Now that we are approaching the one-hundredth anniversary of the outbreak of the First World War, it seems appropriate that the Victory Hall is not forgotten and is rightfully included in IWM’s War Memorials Archive.

Looking back, the Institute was a popular venue for darts, billiards, table tennis, and whist drives to keep people entertained. There wasn’t that much to do in Hewas Water with no pub, just one shop and a bakery for bread, saffron cake and Cornish pasties. Oh yes, the bakery had a telephone – for emergencies! Few people had a phone, so the need to make a call was hardly a priority. Even the Paramor Chapel for worship and Sunday School was a couple of miles away. 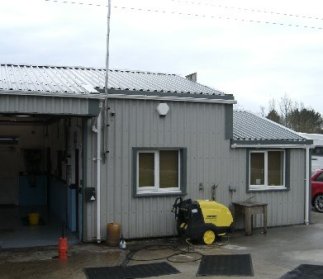 Secondly, and hence my interest in Hewas Water, my sister and I aged 9 and 3 respectively along with dozens of other kids from Hackney in east London were evacuated there in 1940 – a place of safety to escape the bombing. We knew nothing of rural life but we soon adjusted to the situation, making visits to the village pump which supplied water for drinking and cooking. What no running water? Don’t ask.

We walked some distance every day, back and forth come rain or shine, to Lower Sticker Board School. With only three classes, children just slotted into their approximate age group. We remember being taken to the Victory Hall for special social events and concerts, where best dresses were de rigeur.

Halls or Institutes were popular as war memorials after the First World War as they offered people a place to engage and build a sense of community. To date we have recorded 692 war memorial halls or institutes. In the case of the Victory Hall, it became less frequented with the advent of television and more accessible transport during the 1960’s and subsequently it has been converted for commercial use. The school and chapel closed and are now private residences. Happily, the Johnstone’s family estate – they who donated the land for the Victory Hall – continues at Trewithen.

Due to people’s changing needs and environment, it is important for us to record memorials which are subject to change like halls or hospitals to ensure that their identity and the intention behind them is not lost to people today.

Footnote: The historical context of the Victory Hall became known to me when my daughter Josie, a New York based journalist, decided to research my early evacuation days.